It may suprise you to find out that I have an older sister, and this sister had a boyfriend, and this boyfriend had a Mega Drive. Unlike my older brother who wouldn't let me anywhere near his ZX81 or Spectrum, this boyfriend was all too happy to let me have a go on his Mega Drive (aslong as I kept away from his Atari ST!).

This is all fascinating, but what has it got to do with Block-Dizzy I hear you cry! Well, one of the games he had on his Mega Drive was Columns - SEGA's answer to Tetris. And I found myself hooked on that little game. So much so, that fast forward to 2006 when I decided to get myself my very own Mega Drive from a popular auction website I made sure to pick up that game aswell.

What I never realised is that I could have played almost the exact same game on my good old Speccy! Block-Dizzy is a game inspired by Columns released by Your Sinclair in 1992. And it just so happens that Your Sinclair was my magazine of choice (which you probably guessed already by my chosen name) and I had the actual covertape this game came on (and possibly still do). So why didn't I play it? I don't have a clue! Well, 27 years later when I finally decided to go hunting for a Speccy version of Columns I didn't miss Block-Dizzy and will tell you all about it now. 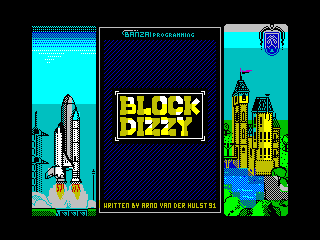 Block-Dizzy is a match 3 or more puzzle game where columns of 3 different coloured blocks fall from the top landing either at the bottom or on top of any previous blocks that are in the playing area. Whilst the column is falling you can rotate the order of the 3 blocks within that column, match 3 or more blocks when the column lands and those blocks are removed and you earn points. Every so often a special block or column will fall which can help you clear out existing blocks - Block-Dizzy has quite a few different specials - one being a bomb that will take out all surrounding blocks.

Having a soft spot for Columns I was nervous trying out Block-Dizzy as it had quite a bit to live up to and I have to say it doesn't disappoint. The game is packed with features and options to allow you to change the game to your needs. You can specify the speed and even level you want to start at (the max being 7), you can also increase the number of bombs and other special blocks if you so desire.

The game is full of colour and the blocks are a good size. Everything moves well and as fast as you'd expect from this sort of game. There's no music but the sound effects are good. Due to space limitations I currently play all my Speccy games via emulation, but I think this is a game that should be played on the real thing - add in a wobbly Sinclair joystick for the full experience!

This is a great interpretation of the original game and I could see myself spending hours playing - although watch out for level 7 its a real panic! 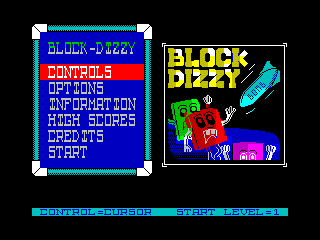 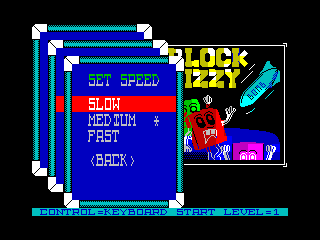 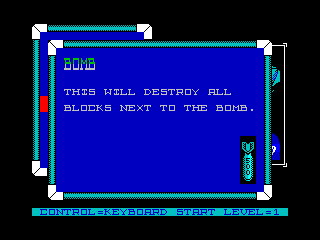 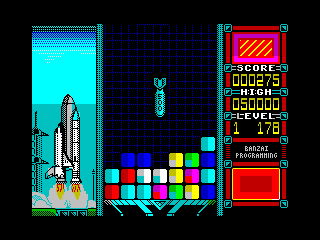 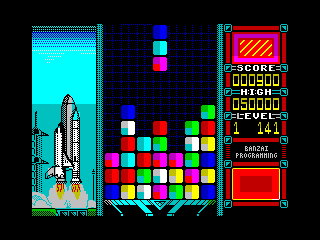 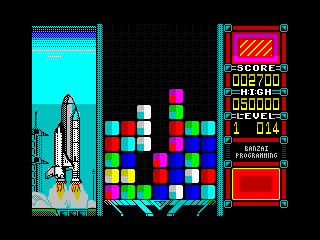 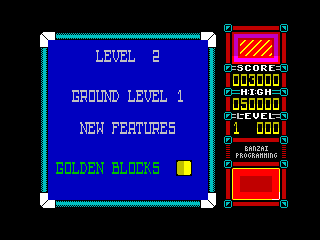 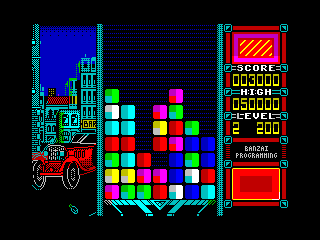