Sports.. What's the point? Why would you deliberately go and get yourself all sweaty and out of breath? Why are footballers paid so much? Why is a rugby ball shaped like an egg? These are all questions I couldn't give a monkeys about! The only sport I've ever enjoyed (and was any good at) was darts. Back in the good old days: in the pub with a fag in my gob, chucking 'arras from the oche, with my accuracy strangely improving the more pints I had!

Speaking of the good ol' days 180 was released by Mastertronic in 1986 is probably the definitive darts game. It's got round the clock, it's got 2 player and it's got a particularly challenging single player mode aswell - so challenging infact I don't think I've ever managed to get past the quarter finals!

So how does it work? Well if you're asking that you've been living under a rock or something - how could you have never played 180? Well I suppose just incase you're a kiddly-winkle I had best explain it... You control an on screen hand which has a bit of a life of it's own (to emulate the difficulty in lining up a shot in real life) - you have to use diagonal controls to get an on-screen response and it does take some getting used to, luckily you have the Tune Up (a timed game of round the clock) option to practise all you like. If you'd prefer to practise without a timer, and like me you're a Billy No-Mates you can always play the player mode all on your own. 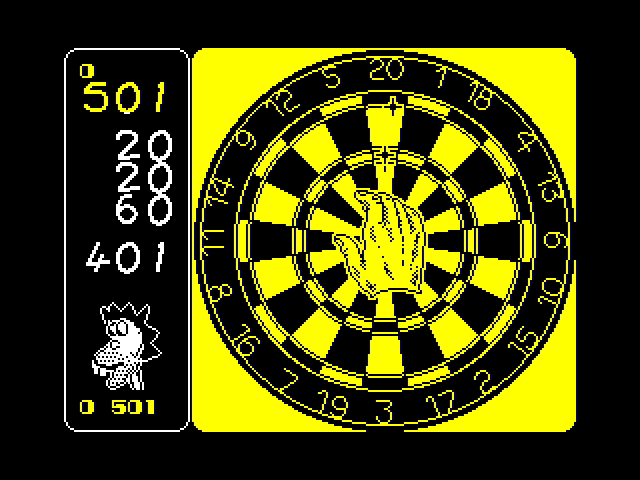 When you've had enough of that, you can go against the computer. Be warned: it doesn't make it easy! You start off playing in the quarter finals, it's best of 3 games of 501. Your opponent is picked randomly from a pool of 7 different players (with names such as Belly Bill, Devious Dave, Sure Shot Sidney and Limp Wrist Larry to name a few) with different skill and play style, in the final you will meet World Champion Jammy Jim who as you may expect is a bit of a tricky one to beat. The player always gets to throw first so make sure those first darts count! 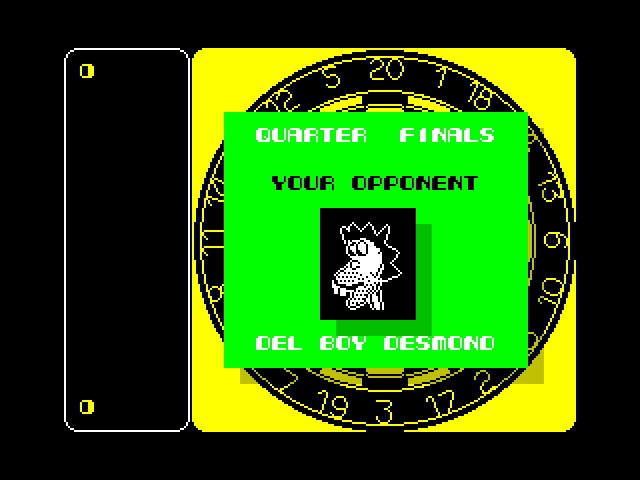 When it's your turn to throw the screen show the dartboard with your floaty hand ready to throw, when it's the computer's turn you see a little animated sequence which keeps you up to date with what the computer is aiming for and what it hit (also keep an eye out in the background for amusing goings on!). 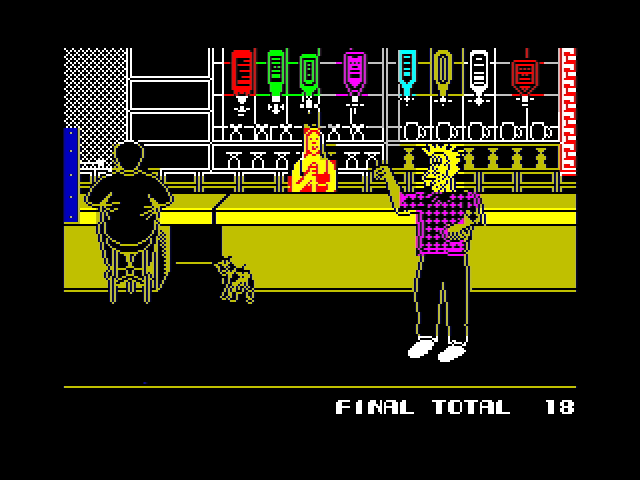 Finally, when the game is over you get rated accordingly.

As I said above this is the definitive darts game for the ZX Spectrum, infact I don't think anyone ever tried to beat it (let me know if I'm wrong on that one!). If you've never played it then I seriously recommend you do so right now.

My only gripe is that you are forced to be right-handed, as a lefty I do find it a little distracting.